Many people regard Fela Kuti as one of Africa’s most challenging and charismatic performers. He was a man of many facets: musician, multi-instrumentalist, composer, Pan-Africanist, polygamist, political maverick, activist, the list goes on. But who many people do not know is Funmilayo Ransome-Kuti, the woman who gave birth to the legend, was just as much a legend in her own right, and played a monumental role in shaping her famous son’s personal philosophy.

Born Frances Abigail Olufunmilayo Thomas in Abeokuta–present-day Ogun State, Nigeria–on October 25, 1900–her father, Daniel Olumeyua Thomas was the son of a returned slave from Sierra Leone whose family had traced their roots back to Abeokuta. During her lifetime she became one of the most prominent figures in her generation. She was a teacher, political activist and women’s rights champion.

Funmilayo grew up middle-class in a christian yet polygamist family who adopted a blend of imposed western Christian values along with aspects of traditional Yoruba culture. She was one of the first women to attend Abeokuta Grammar School in 1914, where she would go on to teach. In 1919, she left for Wincham Hall School for Girls in Cheshire, England, to pursue her studies but later returned to Nigeria. Upon her return she ceased use of her of her “Christian name” and became associated with some of the most important anti-colo 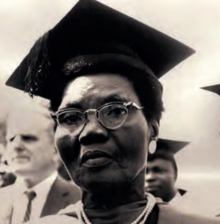 In 1944, along with her sister-in-law Eniola Soyinka, she founded the Abeokuta Ladies’ Club (later, the Abeokuta Women’s Union). The Abeokuta Women’s Union became a political organization uniting the “market women” and middle-class women, with goals of raising the overall quality of life for women in the area while also eradicating illiteracy. Together, these two groups challenged both colonial rule and the patriarchal structure, starting with their resistance and refusal to pay taxes they thought to be unfair. Abeokuta Women’s Union, had a membership of an estimated 20,000 women from every walk of life. Her unwavering commitment to cooperation, solidarity and unity led her to play an active role in politics, notably in the pre-independence constitutional negotiations of 1946. In 1947 she gave clear insight into her views while in London with a controversial article in a British communist publication, The Daily Worker titled “We Had Equality ’til Britain Came,” explaining how colonial rule and mentality had disenfranchised  and oppressed the African woman–she also asked English women to join in helping to liberate Nigerian women. The article went on to be reprinted throughout Nigeria, with the writings mainly being supported by lower-class women while being shunned by those of the upper-class.

Funmilayo was well-traveled and held the interest of all African women at heart. This is illustrated with a notable incident  in 1960 where she was greeted by the Sierra Leone Women’s movement, when visiting the country as a guest of the group, with a song that Funmilayo had created for the group while being carried on group members’ shoulders. She was also a friend to Ghana’s first president and prime minister, who credited Funmilayo with inspiring the Ghana Women’s Association. In the 1950’s Funmilayo was elected to the Western House of Chiefs, using her position as Oloye to further advocate for women. She was named a member of the Order of the Niger by the Nigerian government in 1965, awarded with an honorary doctorate from the University of Ibadan in 1968 and awarded with the Lenin Peace Prize in 1970 for her work (the Soviet Union’s equivalent of the Nobel Peace Prize).

With Kuti’s leadership, the concerns of all Nigerian women from every socioeconomic standing was heard. Women wanted to improve their position in society, along with opportunity to education, suffrage, health care, and other social services.
Her children, would all go on to play important roles in education, healthcare, the arts and political activism. Before her assassination on April 13, 1978, Kuti’s activism, and bold endeavors, such as being the first woman in Nigeria to drive a car, led to her being described as the “doyen of female rights” in Nigeria, as well as “The Mother of Africa.” Trailblazers like Funmilayo are invaluable in the still continuing struggle for furthering human rights–and more specifically women’s rights for Africans worldwide, while also providing a blueprint of sorts for the mavericks who have come after her.

Funmilayo and her family. Via: http://newafricashrine.blogspot.com/

Funmilayo and a young Fela. Via: http://newafricashrine.blogspot.com/